Jean-François Perroy, better known under the pseudonym Jef Aérosol, was born in Nantes (France) on January 15th 1957. He's a French urban stencil artist, a main proponent of the  first generation of street artists who started working on the streets in the early 80s.

Jef Aérosol has been living and working in Lille (in the North of France) since 1984 but his works are exhibited worldwide.

He spraypainted his very first stencil in Tours (Central France) in 1982 : a self portrait enlarged from a photobooth photo. He was a pioneer of what is now called "urban art" and he remains a reference and an influence among street artists of the younger generations.

But a very important part of his work is also devoted to the anonymous characters of the street : buskers, passers-by, beggars, kids, elderlies, ordinary people...

Jef's works can be seen in many  exhibitions, group and solo shows, festivals, art-fairs, auction sales and international events. He is represented by several galleries in France and abroad.

Jef painted a stencilled mural on the Robert Musil Museum in Klagenfurt (Austria) in November 2010.

He was also invited by the French Embassy in Tokyo and participated in "No Man's Land", a very successful and highly prestigious event, along with many French and Japanese artists such as Speedy Graphito, Christian Boltanski, Claude Lévêque, Georges Rousse and so many more...

Jef has painted a huge mural entitled "Chuuuttt !!!" (Hush !) in the very heart of Paris, near the Pompidou museum, his largest stencil to date (about 350 square meters !)

Jef Aérosol's famous and somewhat mysterious red arrow appears on all his works and has become some sort of a trademark, or second signature. Jef sometimes gives his own explanations but he prefers the people to come up with their own interpretations and feelings about the arrow !

Jef Aérosol was the organizer of a group show called "Dites 33", a tribute to the covers of those good old vinyl 33rpm albums (he collects them !). The exhibition gathered 100 artists (and about 1000 pieces !) and travelled in France and Belgium between 2005 and 2009.

Jef released a book in 2007 : "VIP Very Important Pochoirs" (Editions Alternatives, Paris) and another one in September 2010 : "Jef Aérosol, risque de rêves" (éditions Critères, collection Opus Délits). In January 2011, the catalogue of his show at the Musée des Avelines (Saint Cloud) was issued, with a foreword by legendary artist Ernest Pignon-Ernest.

Jef was the one who made the cover and gave its title to the very first book ever published about street stencils :Vite Fait, Bien Fait (éditions Alternatives / Agnès B, 1986).

Since then, lots of articles have been written about him and he has been featured in numerous publications (French and foreign) about stencil and street art.

A true originator who helped spark what is now known as “Street Art” when he sprayed his first stencil series across the city of Tours, France one night in 1982, the self-taught Jef Aerosol has continuously rocked the streets with his oversized portraits and helped define a new public art nomenclature with other French artists like Blek Le Rat, Miss Tic, and Speedy Graphito.

Steadily from the ’80s to the ’10s Aerosol has cut and sprayed stunning portraits of his heroes; cultural icons who stand undiminished by the hype. They connect directly with the masses and shake public opinion with humor and provocation; Strummer, Cash, Vicious, Hendrix, Bowie, Bardot, Cobain, Lennon, Smith, Jagger – all brainy agitators and vixens cut and sprayed in stark layers of black, grey and white. And each with Jef Aerosol’s signature hot red arrows affixed nearby for exclamation.

In Street Art and in the gallery, Jef Aerosol has not purely focused on those well-known personages. Among the faces you’ll find a number of self-portraits and portrayals of the more anonymous among us such as those living and working in the streets.

Like the best photographers, Aerosol catches the instant of truth in his portraits, and reveals a universal humanity in each subject. “In my work I love to call up my feelings and emotions to honor these modern day heroes who have fed my life with their music, art and ideas. This new show is a powerful and vivid collection of these inspirations that I am really excited to bring to New York for the first time," says Jef Aerosol about his solo show at Ad Hoc Gallery, in Brooklyn.

Three decades of getting up on walls in cities including Paris, London, Lisbon, Chicago, New York, Bejing, Venice, Amsterdam, Rome, Zurich, Berlin, Dublin, and Tokyo have given him all the “street cred” Jef Aerosol will ever need.

Sighted in numerous books and by lots of authors, blogs like Wooster Collective and Brooklyn Street Art, and newspapers like The New York Times as one of the lynchpins in the stencil art movement that came to be called “street art”, Jef Aerosol’s work has become a perennial favorite of collectors. His work resides in hundreds of private collections, has exhibited in numerous galleries in Europe, the U.S. and Australia (list below), and is regularly auctioned with Bonhams (London, New-York), Artcurial (Paris), Drouot (Paris), and Dreweats (London).

Jef Aerosol is a legend of Street Art. He has started stencils in 1982 in France. With other French artists like Blek Le Rat, Miss Tic, and Speedy Graphito, he has pioneered a new way of artistic expression - breaking the limits of gallery spaces and canvas format. Streets have become a free and open exhibition arena.

Jef Aerosol initially explored ‘copy-art’ in the late 70s, i.e. creating collages and distortions of photos using all the possibilities of a photocopier. He gradually moved to stencils, influenced by 70s-80s underground rock bands. Characters are the focal point of Jef Aerosol’s art. Whether they are cultural icons or anonymous people, their attitudes carry a genuine emotion, magnified by texture effects, contrasted colours and provoking wording. Jef Aerosol masters the use of stencil. Like the best photographers, he can catch the truth of an instant to reveal its universality.

Jef Aérosol lives and works in Lille, France. Sometimes called the "french Banksy", his art is in many private collections around the world as well as on the walls of cities like Paris, London, Lisbon and Chicago, New York and Bejing. His artworks are regularly auctioned in Paris and London. He has been exhibited in numerous galleries and has participated to various art street festivals internationally. “Jef Aerosol’s work is as eclectic as it is original and very personal. It makes me feel good…isn’t that what art is supposed to do.” says Chris Wilson, musician (Flamin’ Groovies, Barracudas). 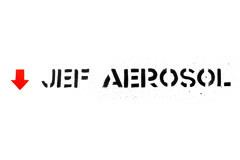